So let me break you down on a molecular level 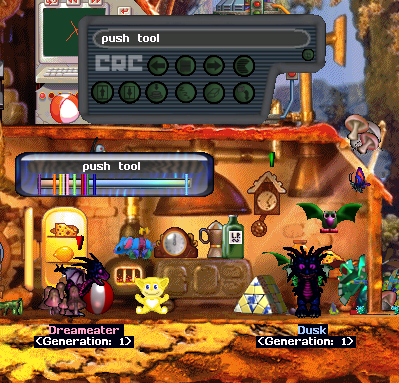 My two testers, Dusk and Dreameater. Dreameater has become interested in the clock. At least she's paying attention to reality; Dusk has been standing there obsessing over a nonexisting door for a few minutes now.

While the rest of the world is having fun with their cellphones and their Pokemon Go, my non-cellphone-owning self has had to find other things to do. One of those things is a somewhat more formal study of the 130 Dragons. For those who may not have read earlier posts, this is a version of my ongoing Dragon Norn genetic breed project that has been given a 'Pineal Gland' organ with a 'Psychosis Generator' emitter that produces chemical 130 at all times from the moment of birth. In short, they are constantly hallucinating and therefore 'insane', at least as much as a Norn can be said to be such.

I have done wolfling runs both of pure 130 Dragons and mixed normals with 130s, and both have been very interesting. I have written on the Creatures Caves forums and elsewhere, a few times, of more interesting incidents. But I decided I needed to do a somewhat more formal, or at least closer, study on these odd Norns and the effect that hallucinating their entire life has on their learning and personality.

Ideally, I would raise only one Norn at a time so I could closely watch their hallucinations every moment. But these Norns are more social than normal and would not thrive kept alone. Plus, social interaction is important even to normal Norns, given they can give each other advice, and the advice is an important way to gauge what they've learned about given subjects. So I decided, while keeping numbers minimal, that I'd have to have at least two of them. Given my need to watch them closely and probably nurture them some, I decided to hand name them, though I am using the Autovocab agent to keep from having to teach them language all the time.

I hatched the male first and named him Dusk for his colors. At first, he was fairly sensible, focusing on real things. Like most newborn Dragons, he quickly found a critter and ate it, then began looking for ways to alleviate his boredom. This is when his 130-ness began to show: 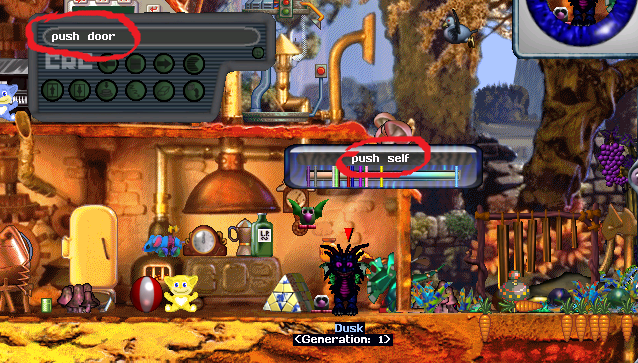 Here's a list of his first few hallucinations. These didn't all happen at once - there were periods of normal focus between them - but this is the sequence in which they occurred.

At 'push door' he got stuck; he alternated between 'push door' and 'push portal' a couple times before deciding the imaginary door was more interesting than the imaginary portal. As far as I can tell he has fixated continuously on that nonexisting door without ceasing for at least a few minutes' worth of game time now.

As you can see from the screenshot above, I can tell when they're hallucinating by comparing the output of the CRC agent with that of the HealthBar agent. When HealthBar and CRC show different outputs, the Norn is responding to a hallucination, and the content of the hallucination will be shown by the CRC.

I have also noticed times where the HealthBar will say 'action thing' while the CRC just says '<nothing> thing', which I'm not sure how to interpret; for example, HealthBar might say 'push Norn' while CRC says '<nothing> Norn'. In normal creatures, the CRC will display '<nothing> thing' when the creature is asleep and dreaming, or when it is awake and thinking about a given object but not considering any action in relation to that object. In short, they might think about food without thinking about eating it - just the concept of food in itself is crossing their mind. At least, that's how I interpret that in normal Norns. In normal Norns, when this happens, the HealthBar will typically display whatever the Norn is actually doing at that moment - if it's asleep and dreaming, for example, it'll say 'quiesce self' while the CRC displays part of the dream content in the form of '<nothing> object'. If the Norn is awake and thinking about an object but not an action the HealthBar will say 'quiesce object' while CRC says '<nothing> object'.

But in the hallucinating Norns I'm not sure how to interpret the feedback. My best guess is that the Norn is hallucinating taking an action it isn't really taking, even though it's focusing on an object that really does exist? But I'm not sure if that's possible. (Evol, if you ever read this, I'd love your opinion on that point!)

Well, once Dusk got himself fixated on the imaginary door, I decided it was time to hatch his female companion. Within moments of hatching, she seized and ate a dreameater bird critter, so her name became Dreameater. 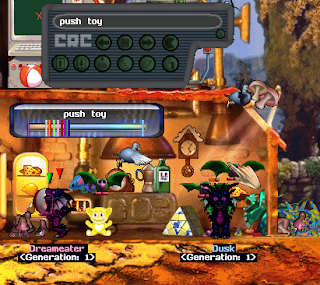 Dreameater has shown more interest in the real world than Dusk, and has not registered any but very fleeting hallucination awareness so far, though she may be experiencing hallucinations she's just not paying attention to (i.e., she's ignoring them in favor of paying attention to more interesting stuff which happens, so far, to be real stuff.) However, her methods for interacting with the real world are a bit unusual. Here she seems to be attempting to push the dodgeball against or into the refrigerator somehow? She kept reaching while 'pushing' at the same time.

The screenshot above shows how much Dreameater likes to play. Although I know she is experiencing the same degree of hallucinatory symptoms as Dusk due to them both having identical genetics, already they are beginning to show personality differences. It did not take long for Dusk to become obsessed by a hallucination, while Dreameater has so far in her short life found the real world more engaging. She does like to do odd things, though, which I suspect is a subtle sign of her hallucinosis.

So far, the two Norns have yet to interact with each other directly. Autovocab hasn't kicked in since Dreameater was born yet so she's still not really talking, though she's starting to learn 'push' from my attempts to get Dusk to 'push toy' instead of staring at his imaginary wall while complaining of boredom. The game is paused as I type this, but I'm going to pause my typing and unpause the game for a little while. I'll be back with more on these two!

So. I'm feeling a little burnt out today. Not on Creatures, but on projects. Geat_Masta has a whole new set of edits for me to try, and they sound very exciting, but looking at the instructions, they keep turning into a blur of nonsense. So I'm taking that as a sign that part of my brain needs a break. Instead, today I decided to do something fun and silly with the game - a Random Event Run. Essentially, you set the game up for a wolfling run, but roll on a table at certain intervals (I'm going to do it every 15-20 minutes or so of real time because I'll actually be sitting here for a lot of it, watching and recording the events). Whatever comes up on the table, I do as an interference in the run. Otherwise I have to be 100% hands off after the Gen1 eggs hatch. I finally got the program to run an undocked world, so yay! There will be less lag to start, and hopefully it'll be a longer time before the game world gets too laggy to be playable anymore. So I set up
Read more