May 22, 2017
So. I'm feeling a little burnt out today. Not on Creatures, but on projects. Geat_Masta has a whole new set of edits for me to try, and they sound very exciting, but looking at the instructions, they keep turning into a blur of nonsense.

So I'm taking that as a sign that part of my brain needs a break. Instead, today I decided to do something fun and silly with the game - a Random Event Run. Essentially, you set the game up for a wolfling run, but roll on a table at certain intervals (I'm going to do it every 15-20 minutes or so of real time because I'll actually be sitting here for a lot of it, watching and recording the events). Whatever comes up on the table, I do as an interference in the run. Otherwise I have to be 100% hands off after the Gen1 eggs hatch.

I finally got the program to run an undocked world, so yay! There will be less lag to start, and hopefully it'll be a longer time before the game world gets too laggy to be playable anymore.

So I set up a less pampering world than I usually would, though not as dangerous a world as I could have. There's a 'normal' room, which I have added toys and animals to in order to make it even more comfortable (though I have not removed the beasts from it, so it's not a purely safe haven):

Artemia Sea is mostly an easy place for Dragon Norns to live, both brainedits and otherwise, but it does have the danger of painful jellyfish stings. And I'm -fairly- sure there's a way for the sharks to kill Norns, but I've only seen it happen once or twice, so it's a very, very rare event. Still, the room isn't 100% benign.

This room is also the one that holds the door and portal which lead to the other rooms. The door leads to the Paradise Room, which is a well-stocked version of Silence Falls. 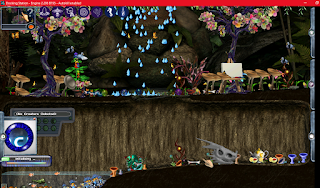 It's a tiny paradise for Dragon Norns. Literally their only problem here is struggling to grab pigeons while in flight.

Aaand finally, there's the Mystery Room. It's Aquatilis Caverna v2. The last time I ran v4, every Norn died of glycotoxin. I'm not sure if v2 is equally dangerous, but it does have a large stock of beasts, so there's that at very least. In any event I'm going to treat ACv2 as the "dangerous" room, even if it's not, in practice, as deadly as v4 can be. 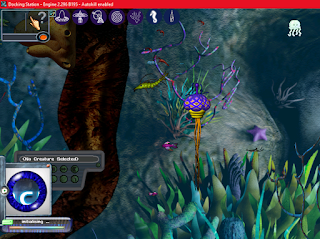 Going through the portal in Artemia Sea leads to Aquatilis Caverna, while the door leads to Silence Falls. Since Dragon Norns are encouraged genetically to check out both doors and portals, neither room should be neglected in the long run, though given the comparative size of AC to Silence Falls, it's likely that I may have to install some more doors and portals so Norns that get in there don't get lost in there. I'm planning to run non-brainedit CFF Dragons. For now though I'm going to start with just one door and one portal in and out of each room.

Okay! The world is set up and the document is open. I don't want the posts to get too long, so I'm going to begin documenting the world in another post.