June 12, 2017
I'm torn between keeping the rather charming 'life cycle' I observed in the original duotract edits, and the equally charming behavior exhibited by my current version of the genome. Basically, there's an instinct that in most Norns has a pretty subtle effect. It kicks on at adolescence and tells them to approach Norn Homes when in need of comfort. So, when homesick, go home. Simple. This is why most Norns -tend- to hang out in the Meso or the Norn Terrarium but may well roam out into the ship at random if they feel like it. The instinct lets them know that going home when they're homesick is a good idea, but since they aren't constantly homesick, they don't always stay home. And even then they're quite capable of ignoring homesickness in favor of some other drives due to the critical drive overwhelmsion system. One of the traits of the duotract edits is that the Norns seem more sensitive to neuroemitters and instincts. I find myself very tempted to s
Post a Comment
Read more

May 28, 2017
I had been really excited for CCSF last year. I didn't have much to contribute, really, just a very very basic agent that most people probably don't have much use for. But I was going to try drawing or writing or at least blogging. Something to participate. But life decided to throw me a spitball, as it often does. I ended up so preoccupied by major crises that I stopped playing Creatures or going online much at all for... jesus. More than six months, now that I think about it. Life just didn't give me enough of a break to think clearly enough to have time to do anything that wasn't urgently survival-based. (I guess I know how Norns feel now...) So I missed out, and I was sad about it even as I knew it was going on. I mean, it started ON MY BIRTHDAY, EVEN. Gahhhhh. Now, here it is, late May 2017, and I can't sleep. A run of dragon testers is going and I don't want to interfere too much, but if I watch, I end up interfering. So I'm leaving them alone as
Post a Comment
Read more

Random Acts of Hand, Part One

Scattered eggs along bottom of Artemia Sea in the middle. First to hatch is a black-and-red male named Akirou. He seems pretty typical, pushing toys and checking out the other eggs while glancing quickly at other things in passing. Next a very dark female named Almodis. She seems very interested in plants, pulling them frequently. Then she checked out a beast, ate a critter, and went back to pulling on and hitting plants. It's a good thing the plants can't be uprooted or killed or this might be problematic behavior. A double-knockout-blue male by the name of Acorn is the third to arrive. He seems a little scatter-headed. Doesn't focus quickly on any given thing. He did eat a few Zander Fish, though, so he'll probably be fine in the long run. I've set their limit to 20, with a starting population of six. Since they're supposed to be wolfing I can't keep too close an eye on all of them, but will do my best to keep an eye on both them and the clock so I kno
Post a Comment
Read more

So. I'm feeling a little burnt out today. Not on Creatures, but on projects. Geat_Masta has a whole new set of edits for me to try, and they sound very exciting, but looking at the instructions, they keep turning into a blur of nonsense. So I'm taking that as a sign that part of my brain needs a break. Instead, today I decided to do something fun and silly with the game - a Random Event Run. Essentially, you set the game up for a wolfling run, but roll on a table at certain intervals (I'm going to do it every 15-20 minutes or so of real time because I'll actually be sitting here for a lot of it, watching and recording the events). Whatever comes up on the table, I do as an interference in the run. Otherwise I have to be 100% hands off after the Gen1 eggs hatch. I finally got the program to run an undocked world, so yay! There will be less lag to start, and hopefully it'll be a longer time before the game world gets too laggy to be playable anymore. So I set up
Post a Comment
Read more

May 21, 2017
From correspondence between myself and Geat_Masta. I may edit this into an actual post later. But for now, a lot of this was stuff I meant to bring up in a post anyway, and I figured it may be of interest to others besides us, especially Intyalle and Savannah (the other people currently testing the brainedits for me.) "BTW, my running hypothesis as to precisely what's going on in their little brains is that the edits are allowing the Comb lobe to make connections between concepts. Normally what it does in part is make connections between decisions, or between decisions and states etc., to form concepts. For example, the Norn feels hungry for protein. It eats a critter. It receives protein, and its hunger for protein goes down. The Comb lobe records this as the beginning of a concept: "Hungry for protein + eat critter; result, hunger for protein reduces; good!" The more often the Norn eats critters and experiences a reduction in H4P, the more the concept "eat c
Post a Comment
Read more

Seasons in the Deep Abyss (and the Artemia Sea) 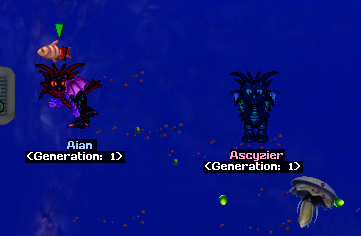 Aian and Ascyzier playing together. These are two of my favorite genetic colors possible with the Draconian sprites. (The Gargoyle arm looks great with the blue... only okay with the black and red. Alas!) I especially like the burning orange eyes Aian has.  Lately, I've been focusing on water environments. Not sure why - just kind of felt like going back to their roots for a while. The issues with the flying agent have something to do with it, but not everything. Grendel_Man's Swimming Agent v3 is very pleasant to watch, too - they do some things they didn't do in v2 - these funny little bobbing motions as they move sometimes, for example. Development continues. As usual, plagued by multifarious issues, but on the whole, things are going well. A couple of people have been helping me test them, which has helped me make progress faster. It's also helpful in that it helps me know when I'm actually seeing changes in them and when I'm just imagining things
Post a Comment
Read more
More posts