I still hate you dude! 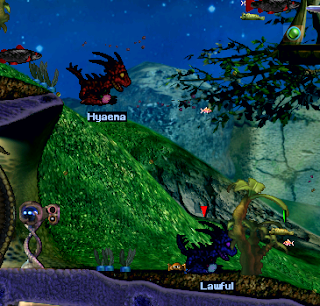 So. These are Lawful and Hyaena, the males of the small starter colony. In general, each of them gets along well with the two females, but they've mostly ignored each other. In spite of that, they apparently have decided they are not fond of each other. Jealousy over the women? They're a bit young for that, especially by dragon norn standards. And besides, I'm not sure Norn brains are complex enough to generate anything similar to jealousy. But that sure is what it looks like to my human brain lol

Anyway, the Norns were going along, living life. The two women were chasing prey and generally having fun together in the corner where the blue carrots grow - one had even decided to sample a blue carrot despite their usual lack of culinary interest in anything that doesn't emit CA 19. The boys were kind of off to the side, within earshot of the girls but separate enough from both the girls and each other to be more or less alone, doing their own thing. Hyaena was nearer the girls, just above the land where the door to the inner rooms is, and Lawful was swimming close to the now-submerged treehouse area.

Suddenly, Hyaena pipes up with, "Hyaena dislike Lawful". He waits a second, then says it again. Lawful, apparently offended, replied that he disliked Hyaena. They repeated this back and forth a few times, which I think is the Norn equivalent of exchanging insults. Usually, this is where this sort of thing ends. They weren't in hitting distance of each other, so I figured they'd continue going about their own business while grumbling at each other now and then. That's what I usually see when this sort of thing occurs.

But Hyaena wasn't going to take all this lying down, I guess. He suddenly swam right at Lawful and hit him. Lawful hit back. Then I figured, OK, they'll have a slapfight, as dragons often do. They usually don't go so far out of their way to attack, like Hyaena did, but still.

This is where it got really funny though. After two or three blows are exchanged on each side, Lawful suddenly turned away from Hyaena, lay down, and went to sleep! All in the space of about two seconds. He sank to the bottom and snored. And snored.

Hyaena, apparently confused, lay down and 'hovered' in the water, silent.

Then Lawful woke up. Within an instant, he turned around, looked up, and said, "Lawful dislike Hyaena"!

So to put this in human terms, it's like two guys got mad at each other, threw a bunch of insults around, got in a fistfight, then one of them suddenly takes a nap, wakes back up, and yells across the room at his confused foe, "FYI I STILL HATE YOU BRO"

So. I'm feeling a little burnt out today. Not on Creatures, but on projects. Geat_Masta has a whole new set of edits for me to try, and they sound very exciting, but looking at the instructions, they keep turning into a blur of nonsense. So I'm taking that as a sign that part of my brain needs a break. Instead, today I decided to do something fun and silly with the game - a Random Event Run. Essentially, you set the game up for a wolfling run, but roll on a table at certain intervals (I'm going to do it every 15-20 minutes or so of real time because I'll actually be sitting here for a lot of it, watching and recording the events). Whatever comes up on the table, I do as an interference in the run. Otherwise I have to be 100% hands off after the Gen1 eggs hatch. I finally got the program to run an undocked world, so yay! There will be less lag to start, and hopefully it'll be a longer time before the game world gets too laggy to be playable anymore. So I set up
Read more